July has been another busy month which has included a recording for NMC, two York Early Music Festival Concerts, a concert in the St Alban’s International Organ Festival and a BBC Prom.

The recording was an exciting two day affair in which we were rediscovering incidental music written by Britten for two plays by Auden and Isherwood; The Assent of F6 and On the Frontier. The scoring for both were similar being for voices (Ex Cathedra in this case), piano duet and percussion, as well as trumpets in On the Frontier. I was absolutely astounded by the colours which Britten was able to conjure with seeming limited forces. The soloists for The Assent were Andrew Kennedy and Jean Rigby, who were both fantastic to listen to. While much of the music is unknown, Britten reworked the The Assent’s Cabaret Jazz Song which later became part of his Cabaret Song cycle. This song sets the words (as featured in Four Weddings and a Funeral):

Stop all the clocks, cut off the telephone,
Prevent the dog from barking with a juicy bone,
Silence the pianos and with muffled drum
Bring out the coffin, let the mourners come.  WH Auden.

Ironically, we were recording this while Andy Murray was fighting for the Wimbledon title. When he eventually won (we caught the final games of the final set), the BBC Sport team tweeted the opening of this poem! 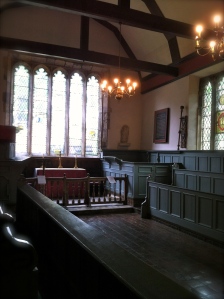 John Potter and I were very happy to be invited to perform a Conductus concert in York again this year. This event was jointly promoted by the York Early Music Festival (as last year), and the Plainsong and Medieval Music Society who were celebrating their 125th anniversary with a conference in York. We sang a short programme of pieces from the forthcoming Conductus II album in the very beautiful (if a little warm) undercroft of the Merchant Adventurer’s Hall. The place was packed and the audience seemed to respond well to the music, even without the film. I think the length was spot on for a late night slot, and there was still time for a pint afterwards. John and I are currently fixing details for two concerts we’re doing in September; in Southampton as part of a conference hosted by Mark Everest, and in Otterberg in Germany. Further details about Southampton will be posted when we have them, but you can see more about Otterberg here. We are pleased the Rogers Covey-Crump is able to join us for both of these, so we will be able to explore the three voice pieces further. We have also approved the second edit of Conductus II and are awaiting artwork so that production can begin soon. We expect it will be released in the autumn.

The second YEMF concert was with the Minster Choir. We performed a programme of Palestrina and Victoria along with some chant allegedly taken from the York Missal. The programme sought to explore the festival’s theme of ‘From Rome to York’ and was centred around Palestrina’s Missa Papae Marcelli, a work which we sing regularly as part of worship though not in a concert situation. The whole experience highlighted the stamina needed to sing a completely a cappella programme for a group who do it so infrequently. The feedback was lovely though and it is hoped that we can build on this success with more concerts in the future. 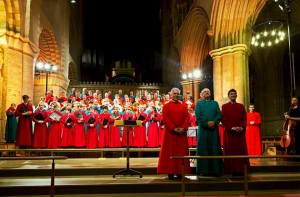 The Minster Choir were also asked to join the choirs of Salisbury and St Albans in a concert as part of the International Organ Festival in St Albans. This was a fantastic experience with the second half dedicated entirely to a massed performance of the Durufle Requiem. Andrew Lucas was insistent that this large choir pay particular attention to dynamics, the quiet moments especially. The effect was magical and made for rather an emotional performance. We received excellent hospitality too and experienced a real sense of camaraderie within our own choir as well as with the others.

Finally, I have spent the last week with Ex Cathedra in London preparing for a BBC Prom performance of Welt Parliament from Stockhausen’s Mittwoch aus Licht. Regular readers will remember what an amazing time I had last summer performing this piece in Birmingham under the direction of Graham Vick. Incidentally, that show won the Royal Philharmonic Society Award for Opera and Music Theatre. We had a great time performing it again, especailly in the Albert Hall which seems so well suited to Stockhausen’s music. It’s a mad piece (and perhaps more mad this time round without the context of the rest of the opera), but everyone seemed to appreciate it. We seem to be on a roll; who knows, we might get to do it again. Here are a selection of reviews:

‘The performance standard was exceptional … the effect was unutterable moving, and completely unforgettable’

‘An unforgettable and thoroughly convincing performance’

Tonight is the penultimate performance of Stochhausen’s epic opera Mittwoch Aus Licht which is being produced by Birmingham Opera, in which I play a parliamentarian in the World Parliament scene performed by Ex Cathedra. While I intend to write more extensively about what an extraordinary experience this has been, in the meantime I thought you might be interested in reading some of the reviews which the show has received so far!

The Daily Telegraph
‘I was both exasperated and enchanted, bored and riveted. Best of all is the World Parliament scene: voluptuous, melismatic and polyrhythmic, it shimmers ecstatically … High praise is due to the director Graham Vick and his colleagues who have devised a flamboyantly imaginative and rigorously executed staging in a disused warehouse, to the superb instrumentalists and to the choirs of Ex Cathedra and London Voices. Whatever one’s ambivalence about the musical content, this is a magnificent show.’

The Guardian
‘the extraordinary a capella World Parliament, wonderfully performed by the Birmingham-based choir Ex Cathedra perched high in umpires’ chairs around the edge of the performing space’

The Arts Desk
‘Ex Cathedra … ululated and chanted with immense power and precision, and conjured a sustainably captivating theatre from thin air.’

I should have posted this sooner, but to keep up-to-date with the rest of the action, why not follow me and others on twitter: @cpogorman, @mittwoch2012, @birminghamopera, and @excathedra.

This week has seen a return to music rehearsals for Stockhausen’s Mittwoch aus Licht with Ex Cathedra for Birmingham Opera Company, after an exciting appearance at the York Early Music Festival.

The York Early Music Festival hosted John Potter and I in the first live research output of Southampton University and Mark Everest’s AHRC funded Conductus Project – Cantum pulcriorem invenire. The performance took place in the beautiful All Saints’ Church on the Harewood House Estate late in the evening. The space was illuminated by candle light and the premier showing of Michael Lynch‘s beautifully evocative video. Thankfully there was enough light so as not to cause too many logistical problems when moving around the space during the performance, though John did have to use the torch app in this iPhone at one point.

Singing the Conducti in this space as a whole concert performance for the first time was a phenomenal experience. It was exciting to see how elastic we could be with the free texted sections, and exploring the juxtaposition of these against the rhythmic caude. I think the space encouraged us to explore the sound we were making too, with the resonance providing a sort of polyphony, especially in the solo numbers. The audience feedback was extremely positive with many fantastic comments about Michael Lynch’s film (during which, one of the horses tried to eat my head…). People also liked the fact that we didn’t take new notes between certain numbers, and that we were not static throughout, but moved around the space.

The first recording, Conductus Vol I – Music & Poetry from Medieval France is being released by Hyperion Records in September and we are scheduled to record Vol II in January next year. With both CDs worth of repertoire under our belts, we hope to be able to perform more gigs during 2013.

Next week sees Stockhausen move into production rehearsals at the Argyle Works in Birmingham. The extensive music rehearsal time that we have already had for this piece has meant that we have been able to really get under its skin. Stockhausen (or his assistants) was so meticulous about his markings and it is impossible to overlook them. It will be very exciting to see Graham Vick’s vision for the piece on the stage. Unfortunately the shows are sold out, but hopefully there will be some media to show once the performances are complete.

After a much appreciated Easter break, The Minster Choir is now back to its full routine of services for the Summer Term. Even though this has just begun, I am looking forward to a busy summer of singing.

On the 10 July, John Potter and I will be performing the conductus programme live for the very first time as part of the York Early Music Festival. This will be accompanied by Mick Lynch‘s new video commissioned for the project. The performance will be largely based on the Conductus I recording (which is due to be released in the Autumn), but will also feature a sneak preview of new material in preparation for the second disk which we will be recording in November. John and I are meeting in All Saints’ North Street this week to begin exploring the new facsimiles.

During June, I will begin rehearsing for a Birmingham Opera Company production of Stockhausen’s final opera, Mittwoch with Ex Cathedra. This is the final work of his opera cycle Licht, and is being produced as part of the London 2012 Festival in August. The excitement of the project lies in the fact that it will be the first time that all six parts of the work have been staged together. It is an epic piece lasting some five hours and features two choirs, flying solo instrumentalists, live electronic and acoustic music and a string quartet streamed live from four flying helicopters. The performances will take place at the Argyle Works, a former chemical plant in the middle of Birmingham, and will be directed by Graham Vick.