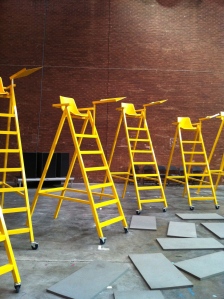 More than a month has passed since the final curtain fell on Birmingham Opera’s production of Stockhausen’s Mittcoch aus Licht, and yet it still occupies a significant part of my musical memory. You will have seen from the reviews I posted previously that the show was received extremely well, especially the World Parliament scene which I performed as part of Ex Cathedra. I think this extraordinary piece stood out from the rest because of its unexpected forces. For an audience to experience 36 unaccompanied voices singing predominantly ‘tonal’ music for forty-five minutes having just emerged from the darkness (literally) and electronic music of the Welcome must have been an extraordinary feeling.

For me, the six-hour show was a success because of these constant contrasts – not only musically, but also as a result of the production. There was always something to look at and marvel, wonder or laugh at. Musically, the constantly changing instrumental and vocal forces had the same effect of sustaining interest, and provoking thought and humor.

While there were several previews which created an expectation of the bizarre and even obscene from this piece, I think the audiences’ reaction was based on whether they could leave their Stockhausen preconceptions at the door as they entered the amazing cathedral-like warehouse space of the Argyle Works. This was a piece of extraordinary theatre that is unlikely to repeated any time soon and should have been enjoyed as such, not matter what ones thoughts about Stockhausen, his philosophies and his approach to music. There was only one very vocal heckler who was asked to leave the second performance, but even this is testament to the fact that this music is able to elicit a response in a time when contemporary music is doing no such thing.

The real joy of being involved in this production was of course the wonderful people whom I was lucky to work with. I’m looking forward to joining Ex Cathedra again later this year as they begin to prepare for Christmas with their Christmas by Candlelight programme. It was also a privilege to work with Graham Vick, who I believe is a true visionary, and his team who were able to make the whole thing happen.