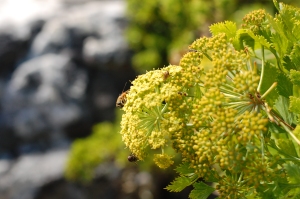 Last month, the Ebor Singers were asked once again to take part in the National Centre for Early Music’s Composers Award 2012 which they hosted in conjunction with The Tallis Scholars and BBC Radio 3. Composers in two age categories were invited to compose a new choral piece with the Tallis Scholars in mind and using John Taverner’s In Nomine theme from Missa Gloria Tibi Trinitas as their starting point. From some 50 entries, seven were shortlisted for workshopping at the NCEM by the Ebor Singers with the composer Christopher Fox.

In the days running up to the workshop, the Ebor Singers had the luxury of three rehearsal sessions in order to learn the shortlisted pieces. This time was invaluable when it came to the workshop day because the singers were confident with corners which may otherwise have presented a challenge. All of the participants commented that they gained most from the workshop because of this preparation. There was a competence and performance confidence from where musical comments and adjustments could be made, rather than most of the time being taken up by singers grappling for notes as had been the experience at other similar events.

The workshops were fascinating from a singer’s perspective. Not only was it interesting to hear the many interpretations of the composer’s use of the source material – some very literal and others rather more esoteric – it was also fascinating to hear the various assumptions made by the composer’s when notating their work and vice-versa. As we have found in previous years, Christopher Fox is a fantastic facilitator in these situations. His charismatic, often ‘devil’s advocate’ approach, created a very interesting dialogue between composer, performer and ‘teacher’. The results of minor suggested amendments often had further reaching effects on the pieces overall.

The day culminated in a public performance by the Ebor Singers of all the workshopped pieces, recordings of which can be heard on the NECM’s website. These were then judged by Delma Tomlin (Director of the NCEM), Peter Phillips (Director of the Tallis Scholars) and Chris Wines (Senior Music Producer for BBC Radio 3). In her winners announcement, Delma highlighted that although there could only be one winner in each category, all who had made the shortlist had won in some way and will have inevitably gained from the experience of working with Christopher Fox and the Ebor Singers. The winners were Benjamin Rowarth (20) and Alex Woolf (16) whose pieces were performed by the Tallis Scholars in Durham Cathedral and will be broadcast on the Early Music Show later in the year.

As always, this competition proved that the future of choral composition – and by extension, performance – is in good hands.