September continues to be a busy month with concerts in Antwerp, Southampton, Bridlington and Otterberg.

After a short UK holiday with my wife at the end of August, I travelled to Antwerp with iFagiolini to take part in a performance of their programme of music in 40 and 60 parts by Striggio and Tallis. The revelation of Robert Hollingworth’s approach to this music (and has seen the group nominated for a Gramophone award for their recordings of it), is his use of voices and instruments in numerous combinations. It was fascinating to work with Robert who, despite the forces, approached the performance of this repertoire as chamber music – it is still one-to-a-part music after all. To add a little variety and auditory respite for the audience, I also sang in a smaller ensemble who performed pieces by Striggio and the amazing Noel! Adieu thou courts delight by Weelkes.

Shortly after the beginning of the new Minster Choir term, I travelled to Southampton with John Potter and Rogers Covey-Crump for our first live performance of Conductus a3. This performance took place during the Cantum pulcriorem invenire: Music in Western Europe conference being hosted by the Mark Everist and his team at the Southampton Music Department. As always, Mick Lynch‘s film went down very well, and the academics in the audience seemed to respond positively to our interpretations of this repertoire. We stayed on in Southampton and became guinea pigs for several papers, helping to demonstrate the performance practicalities of the acadmics’ hypotheses. It was fascinating to see how the two do not always align, and to realise that our own performances of the Conducts repertoire have used the musicology as a starting point from which we have developed our own performing ‘tradition’.

Back in York, the Minster Choir have inducted and read-in their new chorister and Choral Scholar recruits and continue to sing with much gusto in front of huge crowds. We are beginning to prepare for the feasts or All Saints’ and All Souls’ before concentrating on music for Advent and Christmas. This year we will be performing Handel’s Messiah for the first time  in a while, and it promises to be a much anticipated event in the Minster’s calendar.

On the road again, I made my way to Bridlington Priory to sing with the Binchois Consort in a concert which formed part of the Priory’s 900th anniversary celebrations. As always, singing with this group was a fantastic experience. The music, the singers and the banter made it a most enjoyable couple of days. As well as an anonymous Mass and chants for St John of Bridlington, we sang an ‘imporvised’ faux bauden setting of the Te Deum reliased by Philip Weller. The effect of singing these moving triads is so unexpectedly beautiful. Definitely something to explore further I think!

Finally, I have just return from Otterberg where John Potter, Rogers Covey-Crump and I performed a longer version of the Conductus a3 programme as part of the Via Medieval strand of the Kultursommer Rhineland Pfaltz Festival. This was another fantastic experience. Having performed together earlier in the month, we were already in the Conductus groove, and the concert in Germany really allowed us to solidify this. The church was also absolutely stunning; it is one of the only simultaneously Catholic and Protestant foundations in Germany and in the region is dwarfed only by the Dom in Speyer. The warmth of the audience reception was wonderful and the German hospitality was second to none. I really look forward to singing with John and Rogers much more in the future. 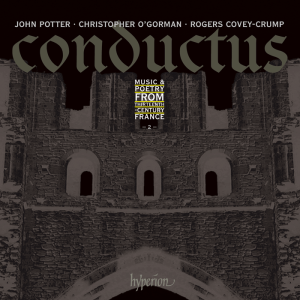 While on the subject of Conductus, Hyperion have confirmed that Conductus Vol. II will be released at the beginning of December. Just in time for Christmas!