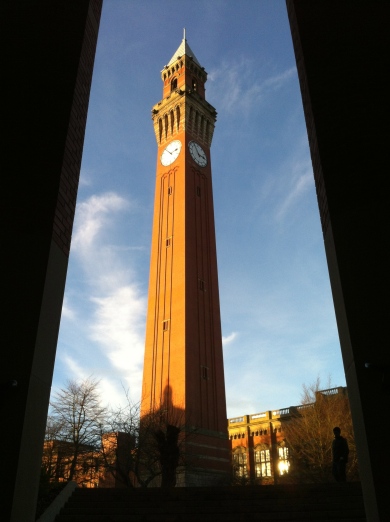 I had a fantastic weekend at Birmingham University singing with the Binchois Consort. As previously stated, we revisited the Brumel programme that we sang in Hautecombe last year. This really is some of the most sublime music ever written and it was fantastic to sing it again, though in a very different setting this time. The Barber Institute of Fine Arts has a fantastic and intimate concert hall, however there is little resonance there. We therefore missed some of the implied polyphony which is often created by a more resonant acoustic. This was of course not detrimental, and just provided different performance challenges. We also had the opportunity to coach and sing with the Birmingham University Singers (BUS), a mixed group of predominantly undergraduate students. They were a charming and enthusiastic bunch who really responded to our suggestions. All in all, I think we put on a very good show. It was also fantastic to meet some members of the audience afterwards, one of whom had just purchased a copy of Conductus Vol I! I hope you have enjoyed listening to it!

I’m preparing to go to Glasgow on Friday for a concert with the men of the Gabrieli Consort. We will be singing a programme of spanish music constructed around the Morales Requiem. We’ll be performing in the Kelvingrove Art Gallery and Museum which looks to be a spectacular space. I’ll post some photos over the weekend.