The New Year has been filled with recordings so far. In early January, in this year of Benjamin Britten’s centenary, I was in London recording Britten’s War Requiem with the Gabrieli Consort. This disk will be the third in their Wratislavia Cantans Oratorio Series in collaboration with the festival of that name as well as the Wroclaw Philharmonic Choir & Orchestra and young singers who have been involved in the Gabrieli Young Singers’ Scheme. With such vast forces involved, one can image that the loud bits were pretty loud! However, Paul McCreesh also coaxed some exquisite quiet singing from the assembled masses. Although I have sung the piece before, I had forgotten how exciting Britten’s orchestration is. The brass fanfares in particular during the Dies Irae are mind-blowing – such evocative writing. The only downside to the sessions was that we didn’t get to hear much of the stella array of soloists; Susan Gritton, John Mark Ainsley and Christopher Maltman. I can’t wait to hear the final outcome!

Then last week, John Potter, Rogers Covey-Crump and I returned to the National Centre for Early Music to record the second disk of the Conductus project for Hyperion Records. It was an intensive few days, but I think the results will be wonderful. Having made one recording already and performed the music live, we have definitely developed a collective sense of style. We have also got to grips with the editions which provide the performer with a mix of standard notation and clips of the manuscript. While I was sceptical about the time involved in preparing these scores for performance over the convenience of standard chant notation, I am now convinced that the results during performance are significantly different and worth the time spent with the manuscript. We could not have got the results we have without the amazing production and engineering skills of Jeremy Summerly and Julian Millard, and of course Mark Everist who was on hand to clear up any musicological questions. Thanks also to Mark’s team of musicologists in Southampton who prepared the editions. 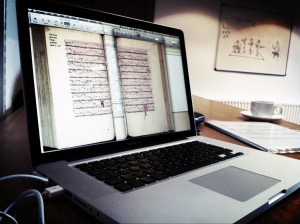 John and I will be performing the two voice version of the programme with Mick Lynch‘s film at Trinity College, Cambridge on the 13 April during their Festival of the Voice. The first outing of the three voice version with Rogers Covey-Crump will be in Southampton in September with the video. Both programmes are also available as full length concerts with an interval but without the film and the repertoire will continue to develop for both as we prepare for the final recording. Further details are available on my Conductus page, or from Robert White (RWhiteAM@aol.com).

Finally, thanks to Stephanie Puzey Broomhead for braving the cold and snow with me this weekend to take some new promo pics which you will see popping up on the website soon.